The case for reincarnation (by Brian Foster) 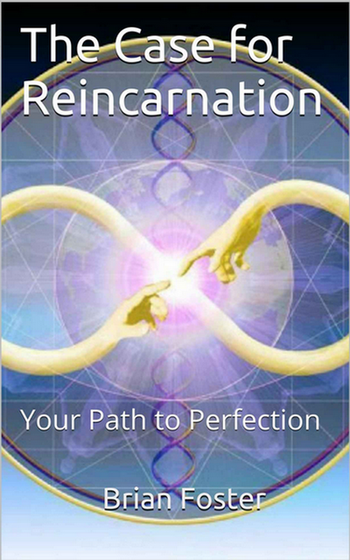 The last one hundred and fifty years
has commenced a quiet revolution,
which is only beginning. The full extent has still
not been revealed. The material disseminated so far
is just the first push, to rebalance the equilibrium
between materialism and spiritualism. For English
speakers only a small percentage is yet translated.
Hence, as each books is translated, new facets
of spirit life and methods come to light.
Brian Foster, "The Case for Reincarnation - your path to perfection", Chapter 28, "Last Words")
Brian Foster has just published his book "The Case for Reincarnation - your path to perfection" deserving some comments. Brian Foster is an American Spiritist who has been active in publishing several texts for the "Spiritist Knowledge" (1) blog, our repository of Spiritist articles. He is also the author of NWSpiritism (2) containing many illuminating articles about Spiritist books and fundamental concepts. Such fine analyses contribute to explain Spiritism to a wider audience in English speaking countries and, for this reason B. Foster is probably the American who best know Spiritism nowadays.

The book scope is to answer some "easy" questions such as:


Why do we reincarnate;
How reincarnation works;
How many reincarnation we must have;
What memories are retained after reincarnation;
What kind of control do we have over the process;
Why suffering is necessary;
How to insure a better next life;
How many one must progress to become a perfect spirit.

Answers are given far from current controversies still existing in the Spiritualist movement and in such a way that they are one step ahead of present tentative explorations that only regard reincarnation as a hypothetical mechanism for anomalistic memories in children or in past life therapy reports. Foster has captured the inherent rational competence of Spiritist principles in explaining hidden aspects of the world around us - an ability requiring the recognition of what should be questioned first. Accordingly, only those who deeply know the principles can make the right questions in order to grasp and understand the true answers.

Foster analysis are interesting because they show how the Spiritist knowledge can be assimilated worldwide, despite pessimistic views. According to some opinions, Spiritism was able to influence only a very restricted place in the world, namely, Latin America and, in particular, Brazil. The common argument is to invoke the adaptation of Spiritism - popular recognized as a religion - to the cultural Brazilian environment. This reasoning is however flawed because Spiritism is established upon solid philosophical (and not religious) basis. Therefore, Spiritism principles can be appreciated by any serious person, group of people or country, regardless the culture.


Brian's book is written as a manual of easy reading for the general audience. Some chapters, however, are even shorter in length than others.
Chapter 24 was logically included by Brian since the world today is no longer divided between the "rich" and the "poor", there is fast-growing middle class. Also interesting are the "Interludes" where several practical cases are studied, providing a rich content for further discussions. Many of the chapter titles explain why the book may be considered a  "practical guide".

References used by Foster are taken from the fundamental codification works by A. Kardec besides L. Denis (see "Bibliography"). The author also knows quite a lot about André Luiz whose works are cited in the book. Although the book scope is restricted to reincarnation, the book also touches other subjects of Spiritist interest and may be regarded as an introduction to Spiritism (See Chapter 15). What drew my attention the most was the peculiar way the author explains his understanding about the proposed questions.

One can feel Brian Foster enthusiasm in his words cited in the beginning of this review once each new Spiritist book is translated into English. Far from confirming the thesis of immiscible cultural environments, the little impact Spiritim may have today on English speaking countries is probably cause by the lack of information transport: as new books are translated, a new world confirming and restating the reality of an American born movement and philosophical doctrine as Spiritualism is revealed (3).

Such Knowledge together with recent Near Death reports and research on reincarnation will feed a very favorable future environment for a worldwide dissemination of Spiritist/Spiritualist principles - in line with the highest plans of moral reformation of our planet. This will take a lot of time, but the first steps were taken as revealed by Foster's book.

Where to find the book

(1) See: "Principles of Good Government as implied by the Spirit World" e "On the way to the light: the spiritist story of Earth as told by Emmanuel".
(2) See also: https://www.facebook.com/nwspiritism

(3) On the other side, the "new world" is described in the peculiar way this knowledge is represented and assimilated in the Spiritist movement in Brazil. The principles are however, exactly the same of Spiritualism.

Posted by Ademir Xavier at 2:19 PM No comments: