God ans His causes I 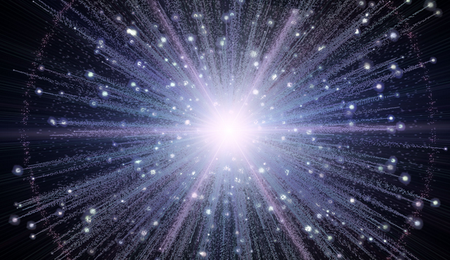 
The present scientific image of creation - supported by modern cosmological theories and having as scope the material phenomena only - concedes that our Universe was created in a single instant in time, the so-called "Big Bang" (1).


The Big-Bang is associated with the origin of the material element. But matter is far from being the only ingredient that exists in the Universe - even from the academic of view. There are also "laws" and "principles" that help to organize matter and give the Universe its shape and structure. These principles regulate how matter interacts with itself and with other elements in order to produce everything we can see with our ordinary senses and mainly all that we can't see. Without the laws, the Universe would be a chaotic mess of matter with no resemblance to what we know today.

The Big-bang theory builds a description of the Universe past history. According to this report, the laws of physics just showed up or "were given" since the beginning, that is, they are not "derived" from the same postulated origin. Therefore, the idea of a "beginning" is troublesome: it would be far easier to explain the Universe if it had ever existed since we would not need to justify the laws.  Therefore, many cosmologists defend a non-causal origin for the  Universe. The task would be even easier if something else could be done: some scientists look for a way to unify the laws of physics. If all laws could be unified, that is, if it would be possible to find a theory where all laws share the same common origin, then it would be clear how to explain the Universe origin. Therefore, the Big-Bang theory is actually incomplete since such unification was not found yet.


Clearly, the motivation for such grand unification is supported by another principle: that it is possible to reduce all phenomena to interactions among the constitutive and primitive elements regulated by the laws of physics. This idea is known as reductionism.

As a consequence of such a view, the Big-Bang event plays exactly the same role of God in cosmology or of all other historically known religious "cosmogonies" (2). In Fig. 1, we represent the natural law as originated also in this first postulated cause.
The Big-Bang plays the role of God in modern cosmology.


What really matters here is take the notion of the Big-Bang and compare it to the introduction of this text. We have already arrived at the following conclusion: the Big-Bang is a scientifically postulated cause to account for the origin of matter, and hopefully, of all natural laws. However, it perfectly admissible to hinder the Big-Bang idea in order to explain what we see around us:

All sciences (biology, chemistry and even physics) do not invoke the idea of the Big-Bang to exist, that is, research in these fields do not require the notion of a first cause to explain particular phenomena.

Can we detect the Big-Bang? The answer is "no" because we have no special sensory organs to capture the kind of evidence cosmologists have found to sustain the idea of the Big-Bang:
Such simple facts are regarded as evidence of an expanding Universe (and only logically and theoretically linked to a first cause). The first fact indicates that, indeed, the Universe is still expanding while the second is interpreted (2) as a direct mark of the initial explosion. We add that, in order to ensure such facts, pieces of equipment are necessary (telescopes, spectrographs, sensible radiotelescopes etc) that are not easily available. Even when such resources were available, it took years of data accumulation in order to interpret them as evidence of the Big-Bang. Anyway, the Big-Bang theory was postulated before such facts have been discovered.


Clearly, no theory supports God's idea not only because, as we could (naively) point out, material and direct evidence are lacking, but also because one believes that everything - including the laws - was created by matter alone. To circumvent this problem (towards a science that admits God's existence), we are faced with a somewhat more serious problem: there are several conceptions and ideas about God:

Since there exists many ideas and conceptions about God and admitting that he is unique and existent, it is absolutely impossible that more than one of these ideas are correct at the same time. Therefore, the immense majority of notions (possibly all of them) that men created about God are wrong.

In particular, there is no way to prove that God is a person as some religious interpretations propose. After eliminating the influence of all religious notions, what is left? What would be the way our modern conceptions could follow, in accordance with the discoveries of science, in order to conceptualize the notion of God?

In other words, what would be the best starting point for science to realize the need of God?

However, it is easy to see that the notion of survival after death somehow dismisses the need of a body for consciousness to manifest. So, since our very consciousness is not an attribute of matter, the idea of God, as a primary, non-personal and intelligent cause is strengthened.  On the other hand, does the very notion that consciousness does not spring from arrangements in matter create an embarrassing situation for reductionism and, therefore, to the idea of the Big-Bang as a sufficient cause for the entire Universe (including us)?  So we can speak about the cosmological consequences of survival by merely stating that consciousness does not depend on matter. There is something much bigger, transcendent and quite unobservable in the origin of the Universe, well beyond the simple birth of matter as heralded by pieces of evidence of an expanding visible Universe. 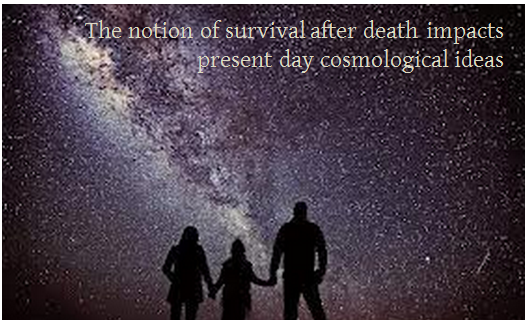 It is precisely this notion that is supported by Spiritism (3): that God manifests himself in the world through the essential attributes of intelligence and that He cannot be grasped as a secondary cause.  By simply examining the effects due to secondary causes, science will never be able to get direct "evidences" that God exists - mainly when our old notions about Him (bodiliness, tangibility, gender etc) come into play. Again, this, however, does not mean that He does not exist, but merely that the way he manifests himself is very far from old religious conceptions.

We will continue to explore this subject in a future post.

(1) Ironically, this name was created by Fred Hoyle who did not accept the idea. With this word, he intended to give a pejorative meaning to the theory.
(2) According to a given theory.
(3) A. Kardec. Question #1, "The Spirit's Book".
Posted by Ademir Xavier at 3:16 PM No comments: