The most important text in the "Gospel according to Spiritism". 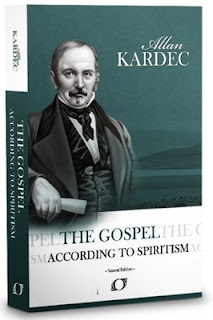 "The Helper...He will teach you all things.
And He will help you remember everything
that I have told you." (John, 14:26)

What man destroys and kills, God's Law
(which is Nature's law) recreates and rebuilds elsewhere.

What is the most important text in the Gospel According to Spiritism? By "importance" we understand a relevance degree that is surely dependent on the moment we live. Here we suggest a good reading motivated not only by present-day terrorist attacks in the name of Religion but also by the everlasting human problem of survival and life meaning.


Launched by Allan Kardec in 1864 as a new interpretation of the Gospels, the Gospel According to Spiritism (1), GAS (in French L'Évangile Selon le Spiritisme) is a compendium of the maxims of Christ in accordance to spirit teachings both within the contexts of the Spiritist and Spiritualist movements that appeared in Europe in the last half of the XIX century.


But here we have a curious situation. Spirit teachings were always rejected by the immense majority of Christian denominations (Protestant and Catholics alike) on the base of their very implications (the acceptance of reincarnation, for example, is completely ruled out in these creeds) and the Old Testament prohibition to invoke Spirits. If Spirits cannot be invoked it is because they exist, but the prohibition was kept as a dogma that contrasts with many other commandments long abandoned by modern society. Moreover, Internet has further complicated the situation because now we can get in contact with many people in the world, cultures which surely hold diverse ideas about Religion.

Rather, the spirit teachings expose the ridicule and error in present-day interpretations of the teachings of Christ and many other dogmatic religions that came afterward. Spiritualism is the "new comforter", the "Helper" that came to teach all things and remember what Christ had told us but was long forgotten. The advancement of Science has made topics such as psychic and reincarnation research accepted possibilities to continually threat established religions of dogmatic nature.  Which religious view can update dogmatic thought in face of such scientific achievements? Which new doctrine could provide solid grounds for the much deviated interpretations of Christian teachings? Let the spirits answer...

Chapter 2: My Kingdom is not of this word. "A point of view".

In the Section that opens Chapter 2 ("My Kingdom is not of this World"),  "The Future Life", Kardec points out why the subject of Chapter 2 is of utmost importance:


Therefore it has been placed as the first item in this work. It must be the point to be most closely looked at, as it is the only one that justifies the anomalies and irregularities of earthly life and also shows itself to be in accordance with the justice of God.

To accept and understand well the future life is the crucial point, the "bifurcation" of thought about to change Humankind altogether. Regardless the lack of worldwide acceptance (both in the way described by the spirits and in the number of people to hold this view), survival is the only possibility in accordance with God's justice ("Except a man be born again he cannot see the Kingdom of Heaven", GAS Chapter 4, Fig. 1). The other option is materialism and eternal nonexistence. If certainty in the future life - as well as the details of their reality (a "clear and precise idea" as Kardec says) - can be provided in a scientific way, Humankind would reach a new level, a new understanding of life and its purpose.

The text below entitled "A Point of View" was written by Kardec and represents a brilliant argumentation summarizing the consequences and the logical implications of survival. Remember, this text was written prior to 1864, well before the foundation of the "Society for Psychical Research" in London by the founding fathers of Psychic Research or the Theosophic movement. This extract of the GAS testifies the deepness of thought Kardec already had in the 3rd quarter of the XIX century as a conclusion of his own psychic research.


The clear and precise idea which can be formed of a future life provides an unshakable faith in what is to come. This faith places enormous consequences upon the moralization of Man because it completely changes the point of view as to how life on Earth is regarded. For those who place themselves by means of thought in the spiritual life, which is undefined, bodily life becomes a mere temporary stay in an ungrateful country. The vicissitudes and tribulations of this life become nothing more than incidents, which can be supported with patience as they are known to be of short duration and will be followed by a more amenable state. Death no longer has terror attached to it; it ceases to be a door opening on to nothingness and becomes a door that opens to liberation, through which the exile enters into a well-blessed mansion, and there finds peace. Knowing that the place where we find ourselves at the moment is only temporary and not definite, makes us pay less attention to the preoccupations of life, resulting in less bitterness and a more peaceful Spirit.

Simply by doubting the existence of a future life, Man directs all his thoughts to earthly existence. Without any certainly of what is to come he gives everything to the present. With the mistaken idea that there is nothing more precious than earthly things, Man behaves as a child who can see only his toys and is prepared to go to any length to obtain the only possessions he judges to be solid. The loss of even the least of these causes pungent hurt. A mistake, a deception, an unsatisfied ambition, an injustice to which the person has fallen victim, hurt pride or vanity, to name but a few, are just some of the torments which turn existence into an eternal agony, so in this manner causing self-inflicted torture at every step. From the point of view of earthly life, in whose centre we place ourselves, everything around us begins to assume vast proportions. The harm that reaches us, as well as the good that touches others, takes on a great importance in our eyes. It is like the man, who, when in the middle of a great city sees everything on a large scale, but who, when looking down from a mountain top sees things in only minute form.

This is what happens when we look at life from the point of view of a future existence Humanity, just as the stars in space, loses itself in the great immensity. We begin to see that great and small things are confounded, as ants on top of an ant hill, that proletarians and potentates are the same stature. We lament that so many short-lived creatures give themselves over to so much labour in order to conquer a place which will do so little to elevate them, and which they will occupy for so short a time. From this it follows that the value given to earthly things is completely in reverse to that which comes from a firm belief in a future life.

But "if everybody thought in that manner, it could be argued that everything on Earth would be endangered because no one would bother about anything" continues Kardec as if foreseeing an opponent counter argumentation in the form of a modern diving into a new "age of darkness" after worldwide acceptance of survival. Against this reasoning Kardec regards:

But Man instinctively looks after his own well-being, so even if he knew it was but for a short while, be would still do his best. There is no one who, when finding a thorn in his hand, will not take it out so as not to suffer. Well then, the desire for comfort forces Man to better all things, seeing that be is impelled by the instinct of progress and conservation which are part of the Laws of Nature. Therefore, be works not only through necessity but because he wants to, and because of a sense of duty, so obeying the designs of Providence which placed him an Earth for that purpose. Only a person who occupies themselves more with the future can give relative importance to the present. This person is easily consoled in all his failings and misfortunes by thinking of the destiny that awaits him. (Paragraph 6)

Besides Kardec's defense of man's well-being as cited above, we could add the importance of understanding well the condition of operation of the future life. For it is not a state freely obtained, it cannot be equated to entering into a paradise or be forever separated from eternal good as the old Christian conceptions still believe. The continuous effort the soul has to undertake in order to progress makes every second spent in this material life a blessing and an opportunity not to be lost. For spirits that are still evolving - the condition of almost the entire Humankind -  the future life is, in a certain sense, the assurance of continuous return to the material life so that the more the being dedicates to improve itself by helping its equals, the more rapid it will be able to detach itself from this world.  On the opposite side, the more a person sustain progress by destroying, killing or harnessing his neighbors, the slower will be his ability to cope with his future: he will have to restore everything he has destroyed because Nature's law demands it.

There is no instantaneous upgrade of the soul, no easy attainment of "eternal glory", and this is, quite understandably, fiercely resisted by traditional Christian thought. However, it is very clear that future life understood in these terms will hardly impose Humankind a return to a new age of unconcern with the material life. Rather, moral evolution requires care and attention to present life in all its aspects, both moral and material.


(1) A. Kardec. "The Gospel According to Spiritism". An English translation by H. Duncan (1987) of L'Évangile Selon le Spiritisme  can be found here:
(2) A paper version can be found at Amazon:

Posted by Ademir Xavier at 4:16 AM No comments: