What death really is (by Andrew J. Davis) 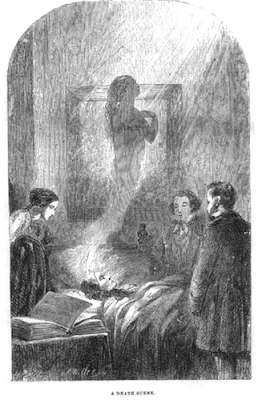 Andrew Jackson Davis (1826 – 1910) was a prominent American medium (1), regarded as "John the Baptist" of Spiritualism. We present an interesting text (2) by him below (extracted from his book "The Temple"), a report of his sights at the instant of death of a person. Obviously, his description below is not valid for every person and all types of deaths (he explains some conditions for this death in his text).  Even so, his vision transforms death into a glorious moment in the life of those who lived well to deserve it.

Death is the word used to signify "the end of life", spoken by persons who see not that seeming death is really ‘the beginning of life,’ and the opening of the sacred volume of eternity.  But let us peer through the seeming, into that which is within the veil.

The person is now dying; and it is to be a rapid death.  Observe something about temperature.  The feet are cold; the hands hot and white; a coldness pervades the entire cuticle.  See?  What is that accumulating in the atmosphere just over the pillowed head?  It is an ethereal emanation – a golden magnetic halo – a throbbing, almost self-conscious atmosphere.

The bodily temperature is now lowering rapidly.  The coldness has extended upward from the toes to the knees, and from the fingertips to the elbows; while, in exactly the same ratio, the emanation has ascended higher over the head.  The arms are now cold to the shoulders, and legs to the hips; and the emanation, although not higher in the air, is more expanded, with a compact white center, resembling the bright nucleus of a miniature sun. This brilliant central spot, is, in very truth, the brain of the new spiritual organism now forthcoming.

The death-cold steals over the heaving breast, and around on either side the temperature is greatly diminished.  Look now! The psychic emanation contains some proportion of every principle composing the soul – motion, life sensation, ethers; essences, vital magnetism, vital electricity, instincts – and, much enlarged by accessions, it has floated up in a compact mass, and now occupies a higher altitude near the ceiling.

Now the lungs have ceased to breathe, the pulse is still, the physical heart is motionless; while the brain cells, the corpus callosum, the medulla, and the spinal cord and ganglia, are ablaze with contractive and expansive energies, which gently pulsate and seem to direct and govern themselves by a kind of automatic self-consciousness.  See!  The negative (gray) substance of the brain is interiorly throbbing – a slow, measured, profoundly deep throb – not painful, but massive and harmonious like the deep heart-beat of the sea.

Look up! The exalted emanation, obedient to its own changeless laws, is now elongated, and has attained a position at right angles with the horizontal body below.  Behold!  See how the outline of a beautiful human form is being fashioned within that emanation.  Beneath it is still tied by a white life-cord to the medulla and the corpus callosum within the brain.

You observe that a very fine vitalic thread still connects the vortices and central fibers of the dying brain with the lower extremities of the exalted outlined human being in the atmosphere. Notwithstanding the existence of this life thread, which acts like a telegraphic conductor – conveying messages in opposite directions at the same moment – you observe that the shadowy image enveloped in a golden emanation, continues almost imperceptibly to ascend skyward.

There! What do I now see?  A symmetrically shaped human head rising above the mass – slowly, beautifully rising out of the golden cloud of substantial principles.  And now appear the outlines of a spiritual countenance – a quiet face and full of beauty, surpassing the power of words to delineate.  Look again!  behold emerging the fair neck and beautiful shoulders; and see! as we gaze, out come one after the other, in a rapid succession, as if influenced and directed by the wand of a magician, all the parts of a new body – a bright, natural looking, yet spiritual image – only a little less than the deserted physical body, a perfect re-appearance of the person in the immediate heavens, prepared to accompany the celestial group of superintending intelligences to the Summerland.

What was that?  In the twinkling of an eye the vitalic electrical telegraphic thread was snapped – the yet lingering particles and principles were suddenly attracted upward and absorbed into the spiritual body – and lo! the new organization is free of terrestrial gravitations, is instantly and absolutely independent of the weights and cares that chained it firmly imprisoned to earth.  (Those only are free at death who have lived righteously. Any enthralling passion, the least feeling of duty undischarged, of injustice committed, holds the spirit to earth, as a ship is fastened by a heavy anchor.  Only the pure are free.)

Here now behold a true, substantial, immortal, spiritual body.  It was sown in darkness and dishonor; it is raised in beauty and brightness. Behold the contrast – the vastly wide difference – between the interior and outward.  Cast your eyes around the room.  There are many friends, aged relatives, and little children, in the death chamber; they mourn, without the comfort even of blind faith; they grieve, with only the whisperings of hope to the doubting ear; they gather around the prostrate, cold body; they press together the lids of the sightless eyes; in silence and in sorrow they withdraw from the scene; and now other hands commence those final preparations with which the living consecrate the dead.

But let us open our brighter eyes – the eyes that we shall all have when clothed with the deathless garment of immortality.  See! The newly organized spiritual body – surrounded by a group of guardian angels – moves gracefully off in the direction of celestial shores.  The arisen personality follows a vibrating thread of magnetic attraction, which while the dying mutations were in process we noticed penetrating the apartment and fastening itself to the earthly brain of the resurrected.  It comes floating down from the sensorium of superior intelligences – a golden fibrillous stream of telegraphic light – sent from on high, to greet with love and guide with wisdom the newly arisen.  The thought-laden love-thread tranquilly draws the new born higher up and farther away.

Over the velvet lands and flower fields of the celestial country the bending bow of eternal promise is visible, filling with indescribable beauty the boundless ocean of world-laden skies, which cover the infinite loveliness the immeasurable zone-lands of the Hereafter.”

(1) http://www.andrewjacksondavis.com/
(2) http://whitecrowbooks.com/michaeltymn/entry/the_death_process_as_described_by_andrew_jackson_davis
Posted by Ademir Xavier at 8:45 AM No comments: