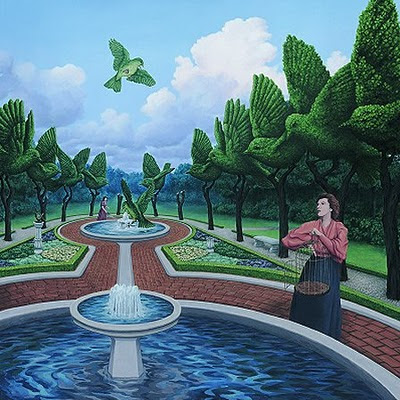 "The most perfect philosophy of the natural kind only staves off our ignorance a little longer, as perhaps the most perfect philosophy of the moral or metaphysical kind serves only to discover larger portions of it. Thus the observation of human blindness and weakness is the result of all philosophy, and meets us at every turn, in spite of our endeavours to elude or avoid it." David Hume (An Enquiry Concerning Human Understanding, 1772)
Even though the scope of this page is not philosophical, it is interesting to realize that deep philosophical questions are behind the fact that most of our universe is invisible and that we are confined to a very limited sensorial realm.
Such questions arise when one considers the existence of objects external to us, the objects of 'human enquiry' and how one can be certain about their existence. We know that science has developed its own procedures in order to explain natural phenomena. Today we known that there are many invisible things in our Universe, things that do not interact with our sensory organs. How do we know that they exist ?
Non-observed and invisible phenomena are understood in terms of theories that first explain how the intermediary devices or methods, used to make such facts visible, can work. In order to build or develop such equipments or methods, we need to understand the theory and strongly believe the existence of the things they are design to show.
In this sense, we must broaden our view, considering not only what is 'observable' and 'visible' as part of the Universe. We must be guided by procedures and tacit considerations in order not to neglect what is not directly observable, for these things might possess a rich ontological content (they may exist independent of us and represent a new reality) and they may be identified as the cause of many phenomena yet unexplained.
Science has unveil the existence of unobservable things along its history, and this is hardly a finished process.
Posted by Ademir Xavier at 1:27 AM No comments:

Some examples of the 'empirical' classification presented in our past post are given below. Not all phenomena are observable as we see. Many of them are non-observable and cannot be sensed in any way.
Observable and cyclic:

How do we know about the existence of non-observable, invisible and sporadic events ? The secret lies in the theories or rational structures that provide ways to experimentally access them.
Posted by Ademir Xavier at 5:12 AM No comments:

Fundamentals I - The Unseen Universe

For centuries, people were unaware of the invisible, that in Nature there are hidden things out of reach of our common senses. The progress of science has unveil a new Universe formed by phenomena that will never be disclosed by these senses alone.
However, they become tangible through a transducer or special media. The role of these media is to be  intermediaries between the phenomena and our senses.
Classification of natural phenomena


The universe contains many strata of different phenomena. Some of them are cyclic occurrences while others are sporadic. Many phenomena were discovered with the progress of science, but quite a few of them are accessible to ordinary observation (the so called human senses).
Instead of categorizing natural occurences in broad areas (physics, biology etc), one can divide them  according to their accessibility to our senses. We suggest to classify nature´s event by the following definitions:
i) visible phenomena.
ii) invisible phenomena.
Visible occurrences are events that can be sensed with the help of magnifying or amplifying instruments. A good example is the use of telescopes to look at distant and faint objects, or the use of microscopes to observe microbes and cells. Invisible phenomena are unobservable events that can´t be made visible through an amplifying equipment, but that can be sensed by a human using a special type of intervening medium. (an example is a radio which transforms electromagnetic radiation in sound waves).
Cyclic and noncyclic phenomena
Another dimension of our phenomenological description is the frequency of occurrence. One can also divide natural phenomena in cyclic and noncyclic occurrences. Cyclic phenomena are events that repeat themselves periodically. Noncyclic natural phenomena are sporadic events.
The frequecy of occurrence is an important aspect for the correct evaluation from the point of view of Science because scientist will have difficulty in providing theories for noncyclic and extremely rare events. Science prefers cyclic phenomena because, for them, it is considerably easier to find a cause (frequent effects are well correlated with repeatable causes), which is the first step toward buiding a satisfactory theory.
In summary, events in Nature can be classified according to their frequency of ocurrence:
Extremely rare phenomena may be cyclic or noncyclic as it is reasonable to expect. It is also expected that cyclic occurrence will be linked to cyclic causes.
Particularly intriguing are non-observable, invisible and non-periodic phenomena. Event periodicity is an important feature in the study of whatever phenomena, since nobody will be willing to accept as real an occurrence that only happens once or even a couple of times. Extremelly rare events are therefore the hardest ones to study and are at the threshold of scientific inquiry just as the non-observable and and invisible ones. 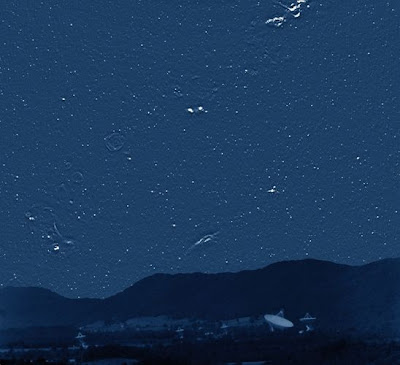 An image of the night sky at 4.85 GHz revealing structures that are both non-observable and invisible according to our definition. Image Credits: National Radio Astronomy Observatory.
In the next post, we will discuss some examples.
Posted by Ademir Xavier at 2:03 AM No comments: