Ectoplasm (from the Greek ektos, meaning "outside", and plasma, meaning "something formed or molded") is a term coined by Charles Richet to denote a substance or spiritual energy "exteriorized" by physical mediums.(Wiki quote)
There is a lot of confusion and misunderstanding concerning the purpose and raison d'etre of such material that today stands as a mythical substance so many times discredited and ridiculed by skeptics, but that is the basis of some psychic manifestations produced by physical mediums.
The production of this substance requires a unique set of special conditions besides a capable physical medium. Such conditions were reproduced in several séances that took place in Campinas/SP, Brazil, between 1955 and 1965 under the mediumship of Mrs. Otília Diogo and Mr. Antônio Feitosa and that were investigated by Mr. Nedyr M. da Rocha (1932-2010) and dozens of other people. In our previous post, we have already discussed and presented some excerpts from Mr. da Rocha book 'O fotógrafo dos Espíritos' (1) (The Spirits' photographer) edited by EME. Here we translate a passage by Mr. da Rocha describing the circumstances of the phenomenon and providing further details.

On a certain occasion in Uberaba/MG (1960), the black curtain that was hanging on a clothesline wire limiting the medium´s cabinet was removed by the spirits, allowing us to clearly see the mediums.
Nineteen physicians were present and also observed the phenomenon. The mediums could be seen expelling ectoplams through several natural apertures of their bodies, what was registered by a camera (2) attached to the ceiling. The same image shows Mrs. Otília Diogo at distance lying on a lounge chair and also producing ectoplasm.

The same scene was registered by another camera in my hands (3).

In other words, the photo below is the same scene showed before (our previous post) as captured by another (much closed) camera. 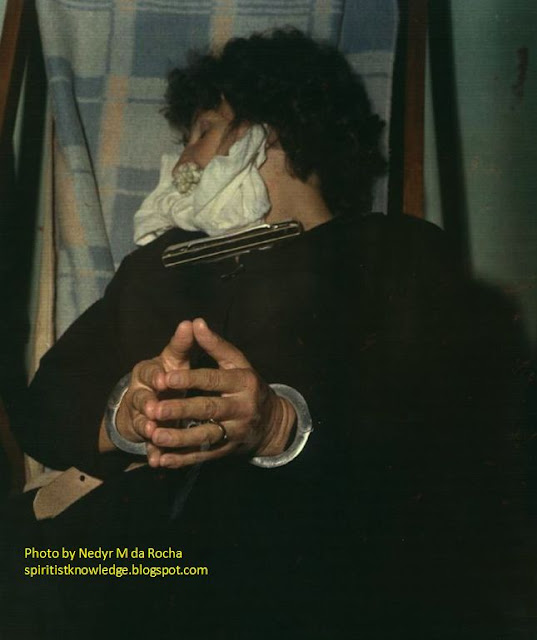 A color photo by Mr. Nedyr M. da Rocha showing ectoplasm: Medium Otília Diogo (handcuffed) in deep trance and an ectoplasmic 'beard' coming out of her nose and ears (1960). A harmonica is seen close to the ectoplasmic mass (on the medium´s neck). According to Mr. da Rocha, this object was the result of an apport phenomenon.
Most of the photographs showing ectoplasmic prominences and other bodies around materialization mediums are old B&W photographs, taken at a time when color techniques were still in their infancy. Although color photography dates back to J. Clerk Maxwell (1831-1879), color photographs of good quality were only available after the second half of the XX century. On the other hand, materialization phenomena are almost always produced in total darkness. In this case, a flash light was used after permission to take the shot was given by the controlling spirits.
Notes and references
(1) da Rocha, N. M. (2011), O fotógrafo dos Espíritos, Ed. EME, Capivari/SP.
(2) Roleiflex camera, Tessar lens 1:3.5, f75 mm, Ilford 120 B&W film, 100 ASA. Reference (1), Footnote on p. 72.
(3) Roleiflex camera, Planar lens 1:3.5, f75 mm, Kodacolor 120 film. Footnote on p. 72.


Posted by Ademir Xavier at 4:50 PM No comments: