The Spiritist Magazine by Allan Kardec in English 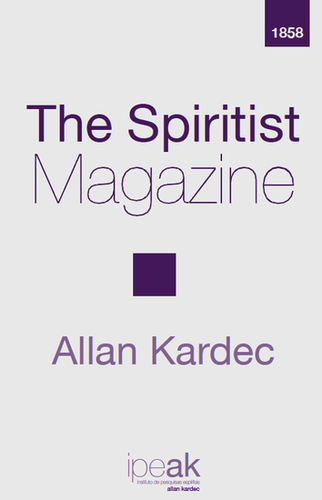 As announced in the blog NWSpiritism, we can now read some historic editions of "La Revue Spirite" (originally published in French, 1) by Allan Kardec in English. The formal name of the work in English is "The Spiritist Magazine - Journal of Psychological Studies". This achievement is just the beginning of a monumental translation work still under preparation by IPEAK (Allan Kardec Institute of Research) and carried out by Luiz A. V. Cheim. IPEAK website is a bilingual page (in Portuguese and French) which we hope will bring more content in English in the future.


This is surely a relevant endeavor, since A. Kardec was one of the pioneers of the psychic research but he is widely unknown to English speaking people. There are several cases of hauntings and psychic communications analysed by Kardec as a first read through "The Spiritist Magazine" can reveal.

The Magazine also was a key tool in the beginning of Spiritism, since it contains many introductory texts where Kardec developed basic principles of Spiritualism and their relationships. For example, Kardec was the first thinker to understand the relation between reincarnation and the processo of soul evolution, linking these concepts to Christian ethics as many articles in the Spiritist Magazine show.

Reincarnation in psychic communications already in 1857.

An interesting example can be found on page 99 of the February 1858 edition (2). Entitled "Conversations from beyond the grave - Evocation of Ms. Clary D." the full text is reproduced below in blue and show the presence of reincarnation ideas in a Spiritist work already in 1857.


Note: Ms. Clary D... was an interesting girl, who died in 1850 at age 13, who has since then stood as the genie of the family, where she is frequently evoked and where she gives a large number of communications of the highest interest. The conversation we reproduce below occurred between us on January 12th, 1857 through her brother, who is a medium.

1. Do you have precise memories of your corporeal existence?
The spirit sees the present, the past and some of the future, according to their perfection and their proximity to God.

2. The condition of perfection is relative only to the future, or it also
refers to the present and the past?
The spirit sees the future more clearly as they get closer to God. After death, the soul sees and embraces, at a glance, all past migrations, but can cannot see what God prepares. For that we need to be fully in God, there are many existences.

4. On Earth or another world?
On another.

5. The world where you will be, compared to Earth, will have better conditions, same as on Earth or inferior?
Much better than on Earth. One is happy over there.

6. Since you are here among us, are you in a particular place? Where?
I’m ethereal in appearance. I can say that my spirit itself extends much further. I see many things and I transport myself far from here with the speed of thought. My appearance is right by my brother’s side and guides his arm.

7. This ethereal body which dresses you up allows you to experience physical sensations, such as heat and cold?
When I remember much of my body I feel a sort of impression, as when a blanket is removed from you and, for some time, you still keep the sensation that you have it on.

8. You said you can move with the speed of thought. Isn’t the thought the soul itself, which detaches from its involucre?
Yes

9. When your thoughts move to a given region, how does the separation of the soul take place?
The appearance vanishes. The thought goes alone.

10. Is it therefore a faculty that stands out, the actual “being” stays put?
The form is not the being.

11. But how does this thought act? Is it not always through matter?
No.

12. When your thinking faculty stands out, don’t you act then by means of matter?
The shadow fades away and reproduces wherever the thought may guide it.

13. Considering that you were only 13 years old when your body died, how can you give us answers beyond the reach of a child of that age, about such abstract questions?
My soul is very old!

15. Could we be allowed to see you here as you are now?
You could.

16. How could that be? It depends on us, on you or on those closest to you?

17. Which conditions should we satisfy to obtain that?
You need to seclude for some time, with faith and fervor; you need to be in a small group; you need some isolation and a medium like Home.

Then, the following article is an essay by A. Kardec about the mediumship of Daniel D. Home.


1 - Original texts of the Spiritst Magazine in French can also be read at the French mirror  site of Ipeak. Just click on the French flag on top and go to the link "Revue Spirite" (left menu "Oevres d'Allan Kardec").


Posted by Ademir Xavier at 5:11 PM No comments: