A new book (in Portuguese) was recently released: "O fotógrafo dos Espíritos" by Nedyr Mendes da Rocha (1932-2010) (Edited by EME). This is a long waited account by Mr. da Rocha who had the opportunity to make hundred photographs of spirit materializations in 1960´s and before with the mediums Mrs. Otília Diogo and Mr. Antônio Feitosa. Translations of some book excerpts will be presented here in many posts.
The book has 4 Chapters; Chapter I and II, the author presents his life story, how he became interested in Spiritism and psychic phenomena; he gives a short historic introduction to Spiritualism and the appearance of the "Spirit's book" by A. Kardec; how the first seances at Casa do Caminho (or 'House of the Way', at his father´s house) in Campinas/SP had began. He also give us a description of a seance in Andradas/MG around 1950 where he first witnessed many physical effects. Chapter III gives further details of the regular sittings at Casa do Caminho and Chapter IV describes the famous Uberaba seances in 1963 attended by many doctors and experts besides dozen journalists and the medium Chico Xavier. The book has many photos, some already seen on many websites, while others never published before.
Most of the seances performed at Casa do Caminho had only one aim: healing. Mr. da Rocha describes how people were healed by materialized spirits. This is often a neglected aspect in many meetings of this type in Brazil. Another often overlooked detail is that all meetings (without exception) had no charges, anybody looking for an end of his/her ailments could freely participate. It is then considerably difficult to sustain that all accounts given by Mr. da Rocha are the product of trickery or hoax. Moreover, Mr. da Rocha was very skeptical in the begining; the immense majority of the meetings were hold privately with no charges or any publicity. Only after years of spirit works witnessed by Mr. da Rocha under strictly private circunstances, the so called 'Uberaba materializations' occured at last.

In the sittings that took place at Uberaba under the scrutinity of a medical committee, mediums Mrs. Diogo e Mr. Feitosa were both handcuffed and tied to chairs using leather belts. During other sittings, under the same controlled conditions (use of police handcuffs and leather moorings), both mediums were also jailed. Handcuff keys were secured by one the committee members.
What makes Mr. da Rocha account so interesting is that he was the first person to use advanced photographic facilities to register the phenomena. He probably obtained the first color photographs of ectoplasm and materialized forms in the world, although most of his photos are back and white. He was also a very detail oriented investigator.   In one of his descriptions of a photograph showing medium Mr. Feitosa disgorging ectoplasm from nose, mouth and ears, he adds:

Such technical references are scattered thoughout the text and often in footnotes. 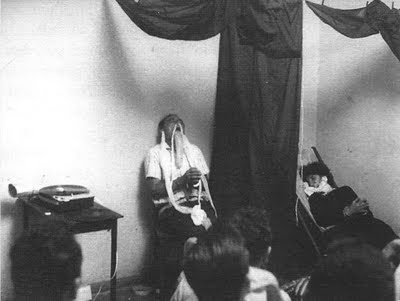 Fig. 1 (Corresponding to Fig. 7 of Mrs. da Rocha book). Mrs. Diogo and Mr. Feitosa scorging ectoplasm during a sitting at Uberaba (~1962). Both mediums are handcuffed and tied to the chairs.
Ectoplasm


Page 71 brings a photo (figure 7 of the book) of both mediums at work taken by a fixed camera (intalled near to the room ceiling). According to Mr. da Rocha, this photo was taken using flash light after proper authorization by the controlling agents who also opened the black curtains seen in the image (all sittings were conducted in total dark). On pages 70 and 71, Mrs. da Rocha describes the famous substance, how ectoplasm look like:

In many circunstances, I saw ectoplasm being put out from both mediums - coming out of the nasal fossa, mouth and ears. I could see it under red light and flash light which made the substance to become luminescent in the dark, though the flash lasted 1/1000 of a second. Such phenomena allowed a more detailed observation.

I state that ectoplasm resembles in a certain sense dense cotton that was previously kneaded, you can see lints coming off the whole that was smelless with a whitish aspect. It was always moving around, ready to assume a certain shape.

Pag. 73 has another photo of medium Mr. Feitosa, this time taken with a camera that Mr. da Rocha held in his hands. The image is the same as shown in Fig. 1 above, but from another angle. Mrs. da Rocha comments:

One can see the medium and a large amount of ectoplasm expelled to form two hands (ectoplasmic 'gloves'), one coming out of his mouth and another hanging at the end of an ectoplasmic mass on the medium lap. This photo also shows two ectoplasm types: one, smooth and dense forming the hand and reflecting the flash light, and another resembling a tuft of compacted cotton, falling on the mediums legs and torso, showing that it was a solid and weighty substance and not a fluidic or ethereal one.

In the next posts I will bring translations of many passages of this book and comment them. So far we can say that Mr. da Rocha book is an interesting historical description of a well documented but unfortunately misundersood materializaton occurence in Brazil that should definitely take part of Spiritualist history.
Posted by Ademir Xavier at 8:41 AM 4 comments:

A New Era for Humanity 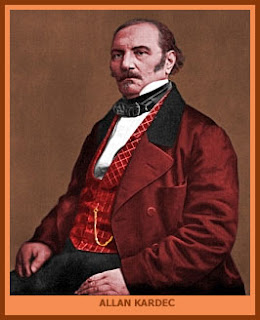 “Unshakable faith is only that which can meet reason face to face in every Human epoch.” - Allan Kardec.
What it is


• “Spiritism is a science which deals with the nature, origin and destiny of Spirits, as well as their relationship with the corporeal world.”
• It is the set of principles, as revealed by the Superior Spirits, contained in Allan Kardec’s works, which constitute the Spiritist Fundamentals: The Spirits’ Book, The Mediums’ Book, The Gospel Explained by Spiritism, Heaven and Hell, and The Genesis. Allan Kardec (Taken from Qu’est-ce que le Spiritisme? - Préambule) Translated from the original French
What it reveals


• It reveals more profound concepts with respect to God, the Universe, the Human Being, the Spirits and the Laws which govern life itself.
• Furthermore, it reveals who we are; where we have come from; where we are going to; what is the objective of our existence; and what are the present and past causes of pain and suffering.
What it encompasses


• Spiritism contributes to all areas of knowledge, human activities and behavior, offering new perspectives for humankind.
• Spiritism is studied, analyzed, and practiced in all the fundamental aspects of life, such as scientific, philosophycal, religious, ethical, moral, educational, and social.
Its main principles are:
• God is the Supreme Intelligence, first cause of all things. God is eternal, immutable, immaterial, unique, omnipotent, supremely just and good.
• The Universe is God’s creation. It encompasses all rational and non-rational beings, both animate and inanimate, material and immaterial.
• In addition to the corporeal world inhabited by incarnate Spirits, which are human beings, there exists the spiritual world, inhabited by discarnate Spirits.
• There are other inhabited worlds in the Universe, with beings at different degrees of evolution: some less, some egual, and others more evolved than men on Earth (us).
• All the Laws of Nature are Divine Laws because God is their author. They cover both the physical and moral laws.
• A Human Being is a Spirit incarnated in a material body.
• What connects the physical body to the Spirit is a semi-material body named perispirit.
• Spirits are the intelligent beings of creation. They constitute the world of the Spirits, which pre-exists and outlives everything.
• Spirits are created simple and ignorant. They evolve intellectually and morally, passing from a lower order to a higher one, until they attain perfection, when they will enjoy unalterable bliss.
• Spirits preserve their individuality before, during, and after each incarnation.
• Spirits reincarnate as many times as is necessary for their spiritual advancement.
• Spirits are always progressing. In their multiple physical existences, they may sometimes become stationary but they never regress. The speed of their intellectual and moral progress depends on the efforts they make to attain perfection.
• Spirits belong to different orders according to the degree of perfection they have attained: Pure Spirits, who have attained maximum perfection; Good Spirits, whose predominant desire is towards goodness; and Imperfect Spirits, characterized by their ignorance, their tendency towards evil, and by their inferior passions.
• The Spirits’ relations with Human Beings are constant and have always existed. The Good Spirits attract us towards goodness, sustain us in life’s trials, and help us bear them with courage and resignation. The Imperfect Spirits induce us towards error.
• Jesus is the Guide and Model for all Humankind. The Doctrine He taught and exemplified is the purest expression of God’s Law.
• The morality of Christ, as contained in the Gospels, is the guide for the secure progress of all Human Beings. Its practice is the solution for all human problems and the objective to be attained by Humankind.
• Human Beings are given free-will to act, but they must answer for the consequences of their actions.
• Future life reserves for Human Beings penalties and pleasures according to the respect they do or do not show for God’s laws.
• Prayer is an act of adoration for God. It is found in the natural law and is the result of an innate sentiment in every Human Being, just as the idea of the existence of the Creator is innate.
• Prayer makes Human Beings better. Whoever prays with confidence grows stronger against evil temptations, and God sends the Good Spirits to assist them. This assistance will never be denied when requested with sincerity.
The Spiritist practice


• All Spiritist practice is gratuitous, following the orientation of the moral principle found in the Gospel: “Give for free what you receive for free.”
• Spiritism is practiced with simplicity, without any external forms of worship, within the principle that God should be worshipped in spirit and in truth.
• Spiritism has no clergy, nor does it adopt or use at any of its meetings or during its practices the following: altars, images, candles, processions, sacraments, concession of indulgences, religious vestiments, alcoholic or hallucinogenic beverages, incense, tobacco, talismans, amulets, horoscopes, cartomancy, pyramids, crystals, or any other objects, rituals or external forms of worship.
• Spiritism does not impose its principles. It invites those interested in knowing it to submit its teachings to the test of reason before accepting them.
• Mediumship, which allows the Spirits to communicate with Human Beings, is a faculty which many individuals bring with them at birth, independently of the religion or belief that they may come to adopt.
• Spiritist mediumship practice is solely that which is practiced based on the principles of the Spiritist Thought and within Jesus’ examples.
• Spiritism respects all religions and doctrines; values all efforts towards the practice of goodness; works towards peace and fellowship between all nations and all peoples, regardless of race, colour, nationality, creed, cultural or social standing. It also recognizes that “the truly good person is one who complies with the laws of justice, love, and charity in their highest degree of purity.” (The Gospel According to Spiritism – chapter 17 – item 3)
“To be born, to die, to be reborn yet again, and constantly progress…”- Allan Kardec

The study of the works of Allan Kardec is fundamental to achieve a true understanding of the Spiritism.
Posted by Ademir Xavier at 4:44 PM No comments: