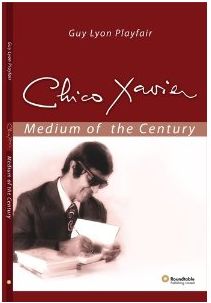 Although little is known of him outside of Brazil and other parts of the Portuguese-speaking world, Francisco Candido "Chico" Xavier is considered by those who knew him and witnessed him to be one of the greatest mediums ever. His biographer, Guy Lyon Playfair of the United Kingdom, a long-time investigator of psychic phenomena, subtitles his book, "Medium of the Century."
Xavier, who dropped out of school at age 13, produced, by means of automatic writing, 458 books with sales in excess of 50 million. All of the royalties were donated to charity as Xavier lived on a very modest income from his government job and pension. In 2000, a newspaper in the Brazilian state of Minas Gerias asked its readers to vote for "person of the century." With more than 700,000 readers responding, Xavier won the vote over an aviation pioneer, a former president of the country, and the legendary soccer player, Pelé. More than 120,000 people lined up in a queue over two miles long to file past Xavier's coffin and 30,000 joined in the funeral procession. The state governor declared three days of mourning. A stamp honoring Xavier on the 100th anniversary of his birthday on April 2, 2010 was issued by the Brazilian post office.
Playfair informs us that young Chico began demonstrating psychic abilites at the age of four but it was not until 1927, at age 17, that he became a practicing medium. His 421-page 1932 book entitled "Parnassus From Beyond the Tomb," became a best seller in the Portuguese-speaking world. It contains 259 poems signed by 56 different deceased Brazilian poets, all of them judged by experts to be in the style and character of the individual poets when they were alive.
Xavier's books include literature, history, science, and Spiritist doctrine, the content going far beyond Xavier's education and knowledge. In discussing one of the science books, Playfair states that "it reveals an immense knowledge of several sciences that no ordinary writer, even a qualified scientist, could have assembled without copious research and note-taking." A book on first century Rome runs to 553 pages.
Playfair extracts some very interesting passages from Xavier's books. For example, he quotes spirit communicator Andre Luiz, who had been a Brazilian doctor when incarnate, as complaining of the difficulty of finding words to explain the spirit world. "Death merely dilates our concepts and clarifies our introspection, illuminating our moral sense. But in no way does it solve the problems which the Universe poses at every step with its display of grandeur."
André further communicates that "all matter is essentially energy made visible" emanating from a divine source that even he, in his new environment, was incapable of comprehending. "André Luiz strips the next world of all its metaphysical aspects and presents it as something just as real as this one," Playfair offers.
Xavier's credibility and reputation were such, Playfair further informs the reader,that messages received through his hand were accepted as evidence in a court of law.
Xavier did not take credit for the books and in each case stated the name of the spirit person who dictated it to him. Playfair points out that had Xavier taken credit for the writing himself, he would have received much greater acclaim than he did, and he would have been a very rich man. One is left with the impression that Xavier was a very humble and sincere person.
While the book runs to only 98 pages, it is filled with interesting and intriguing facts about Chico Xavier and about the "other world," as communicated through his hand. It has prompted me to search for books by Xavier which have been translated into English.