A statistical approach for the determination of the time interval between succesive reincarnations. 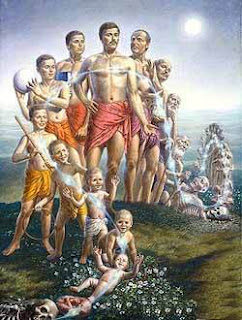 During the 7th ENLIHPE (last August 20 2011), we have the opportunity to present the work: "A statistical approach for the determination of the time interval between succesive reincarnations."
As it is well known, Spiritism as introduced by A. Kardec, was the first spiritualist movement in the West to fully understand the importance of reincarnation. Reincarnation is the only mechanism that can simultaneously explains many anomalies in the human personality but also show a world view more in accordance to principles of a natural justice and equity. Therefore, it is important to undestand the consequences of reincarnation not only for all of us (as individuals) but as a social and demographic phenomenon.  Assuming reincarnation as universal law of Nature, it is valid for all human beings and, therefore, it surely has collective consequencies.
The aim of this work was to build a numerical model to calculate the time interval between sucessive reincarnations of a human individuality. The work is based on the following principles:

Principles stated above are based on many answers provided by Spirits in 'The Book of Spirit' (SB). For example: principle #1 is stated in SQ-Q#224; principle #2 in SB-Q#92 and 150; principle #3 in SB-Q#83; principle #4 in SB-Q#137; principle #5 in SB-Q#172 and 173, principle #6 in SB-Q# 81 and, finally, principle #7 in SB-Q#68.
In the work, we made several predictions concerning the way populations on both physical and spirit planes interact. Such prediction are based on the principles described above and some other hypothesis. We finally made some numerical calculations showing that the 'erraticity time' (the time between sucessive reincarnations) is hidden in the birth rate of the physical population.
Graph below shows the time evolution of life expectancy on the physical plane (left) and the erraticity time (right) in years for the Brazilian population as calculated by our model. Both intervals are given as a function of time from 1970 and 2000. 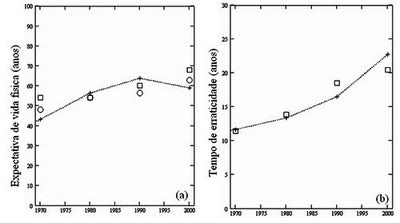 How could such predictions be validaded ? If it were possible to track the previous life of a group of individuals (for a restricted population, say 100 people) by finding the date of the previous death - to a certain degree, this was shown to be possible in some cases (Stevenson, 1966) - erraticity time could be statistically calculated since the birth date of the present life is already known.
Such results show the heuristic fertility of spiritist principles that not only admit that we all survive physical death but that our personality evolves through many lives on the physical plane.
References
Kardec A. (1857). 'The Spirit´s Book. There are several editions in English of this work;
Stevenson I. (1966) Twenty Cases Suggestive of Reincarnation. (1966). (Second revised and enlarged edition 1974), University of Virginia Press, ISBN 0813908728.

Posted by Ademir Xavier at 9:10 AM No comments: