The moral crisis (by Leon Denis) and the Spiritist answer

The present hour is a time of crisis and renewal. The world is in fermentation, corruption is in the ascendant: the mighty shadow spreads and the peril is great, but behind the shadow we perceive the light, and behind the peril, salvation. Society cannot perish: if it bears within it the germs of decomposition, there likewise are those of transformation and redemption. Decomposition confirms death, but it also heralds the new birth. It is the prelude of another life.

And whence will proceed this light, this salvation, this redemption? Surely not from the Church, which is incapable of regenerating the human mind. Not from science, which cares neither for conscience nor for character, but only for that which concerns the senses: devotion, virtue, justice, love all that enters into the making of noble characters and wholesome societies - none of these appertain to the domain of the senses.

That the moral level should be raised, that the two streams of superstition and skepticism, which terminate in a sea of sterility, may be checked, a fresh conception of life and of the universe is indispensable. One which, based upon the study of nature and conscience, upon the observation of facts and the principles of reason, may at last determine the aim of our life and regulate our onward progression. What we require is a belief which affords an incentive for improvement, a moral sanction and a strong conviction as to our ultimate fate.

But this conception and this teaching we already have: and daily are they becoming better known. Above the din of the disputes, above the divergences of philosophical schools, a voice has made itself heard - the voice of the Dead. The Dead have revealed themselves from beyond the grave, more alive than when they stood amongst us in the flesh. In the light of their revelations the veil has fallen, which hid from us the future life. Their precepts will conciliate all conflicting creeds, and will cause a new flame to arise from the ashes of the past. In the philosophy of Spiritism, we find again that secret doctrine which ran like a golden vein through the quartz of the ages, but renovated and now cleansed of its dross. Its shattered remnants have been gathered and bound together by a powerful cement, and even now frame an edifice vast enough to accommodate all nations and all civilizations. That the strength of its foundations might be beyond suspicion, the new edifice has been erected upon the rock of direct experience and constantly renewed faith. Thanks to it, the certainty of immortality is being made manifest to all men, together with the innumerable existence and the unceasing progress that await us in the successive cycles of eternity.

Such doctrine is bound to transform all the nations and classes of the world: conveying light where all is dark: melting, with its heat, the icy selfishness that lies at the heart of man: revealing to all men the laws that unite them with the bonds of a close solidarity. Its unification will be compounded of peace and harmony. Through it we shall learn the act with one heart and with one mind. Conscious of his strength, man will be able to advance with an assured tread towards his splendid destiny. 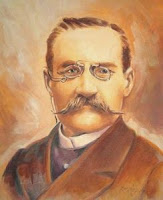 Email ThisBlogThis!Share to TwitterShare to FacebookShare to Pinterest
Labels: spiritism and the gospels, the crisis of the modern world, the moral crisis, world crisis
Newer Posts Older Posts Home
Subscribe to: Posts (Atom)