Painting and Drawing mediums: those who paint and draw under the influence of spirits. (A. Kardec, 1861,"The Book on Mediums", 2nd Part, Chapter XVI, 'Special Mediums'.)


The literature of psychic phenomena has many colorful types of mediumship manifestations, of mediums with amplified human skills. These were the ancient wizards of primordial times, the prophets of the Biblical past. All types of human manifestations are, in fact, possible through mediumship including highly specialized abilities such as music composition, poetry and painting (rarely called psychopictography).


The most notorious example of music composition was Mrs. Rosemay Brown (1916-2001). In English speaking countries the poetic mediumship of Patience Worth (Braude, 2003) became very notorious. However, painting is also a registered feature of mediumship phenomenology. Although both kinds of 'artistic mediumship' are extremely rare, when they occur, they offer us many clues about how the process of 'spirit interaction' with the medium takes place. A good example is the mediumship of Coral Polge.


First, we must understand that everything that is psychically produced makes use of what is on the medium's mind. Except perhaps for the case of Rosemary Brown (who said to receive music by dictation), all kinds of 'mental mediumship', depend to a high degree on the medium's skills and abilities. Everything happens as if the medium were a chisel, a brush, a pen or whatever tool that the spirit's mind uses to compose, write or paint. In this sense, if the medium is 'imperfect', no matter how much genius there is in the spirit, the final result will not resemble the work of a genius. Therefore, the quality of art produced by such mental mediums is a direct function of the training or previous ability that the medium has shown.

L. Gasparetto in trace delivering a message (in Portuguese with a strong French accent) by Toulouse Lautrec on April 1981 during a painting seance. Some scenes of psychic painting are also shown. English subtitles were added.

Besides Coral Polge, another recent example is in the book 'Is that you, Renoir ?' by E. Dubugras. Luiz Antônio Gasparetto was born in 1949 in S. Paulo, Brazil. Today, Luiz Antônio no longer works as a medium, but his story is worth reading. According to Elsie Dubugras:


A new phase in his life started when (...) during one of these (Spiritist) meetings Luiz Antônio began to feel quiver  and pains and suddenly his arms became paralyzed. He was unable to move them until after the meeting was over...After this, he was possessed by an uncontrollable urge do draw. (Dubugras, 1979, 'The start of mediumship', p. 93)

Luiz Antônio attended then another Spiritist meeting among well-trained mediums when 'strange things began to happen':


A medium began speaking in a language unknown to her, while Luiz Antônio, in trance, drew rapidly and answered in the same language...He only came out of his trance two hours later. (Dubugras, 1979, 'The start of mediumship', p. 94)

It soon became a common feature of his mediumship the production of a large variety of drawings including people, landscapes and abstract compositions with no authorship identification. During a short period of time, Luiz Antônio produced more than 5000 paintings. Then, in 1971 his parents took to Uberaba to attend a meeting with the Brazilian medium Francisco Cândido Xavier:


Once there, he was asked by the person in charge of running the meeting to sit at the medium's table. Luiz Antônio took out the sheets of paper and crayons he had brought along and during the sessions drew the pictures that came through. At the end of the session, fifteen pictures were ready and Chico Xavier, much to Luiz' surprise, said that some were the work of Rembrandt. From then on, other spirits of famous painter started to draw through him, signing their works. (Dubugras, 1979, 'The start of mediumship', p. 96) 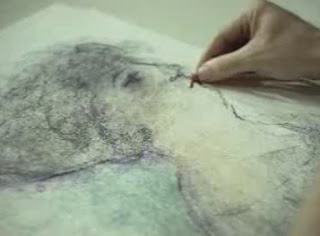 Who were the painters?

At the time, several distinct personalities had manifested themselves through him, some occasionally and other more frequently:


The group of discarnates who paint through Luiz Antônio include Renoir, Degas, Toulouse Lautrec, Delacroix, Portinari, 'Aleijadinho' who was a famous Brazilian painter and sculptor....Also Lasar Segall, Modigliani, Anita Malfatti, Raphael, Rembrandt, Botticelli, Van Gogh, Matisse, Manet, Monet and other who paint occasionally. (Dubugras, 1979, 'Who are the painter, p. 108)

The musical project carried out by Rosemary Brown (Brown, 1971) had a discarnate manager in the figure of Mrs. Brown's spirit guide, Franz Liszt. In the case of Gasparetto, the rule was taken by Toulouse Lautrec. As in the case of Mrs. Brown, Gasparetto was able to describe several aspects of the painter's personalities:

When she controls Luiz Antônio, he paints calmly and speaks to those nearby in a gentle way. (about Tarsila do Amaral, Dubugras, 1979, p. 103)

Picasso gets the most easily upset when observers move or whispers. There have been instance where, despite repeated requests for silence, the people walk about and talk in low tones. The painter, without further warning, has crumpled the paper on which he was drawing and put a stop to the work and to the session! (on Pablo Picasso, Dubugras, 1979, p. 104)

When Portinari, the Brazilian painter, is present, Luiz Antônio feels the problems of the impoverished Brazilian peasant which the artist still depicts in his own unimitable style. (on Cândido Portinari, Dubugras, 1979, p. 104)

Toulouse Lautrec... is always  concerned about the pictures he produces through him and once, feeling that the anatomy of the figures was inadequate, he decided to practice during a session. (on T. Lautrec, Dubugras, 1979, p. 105)

Degas seems to have less difficulty in drawing through Luiz Antônio as he paints ballerinas in the most difficult poses imaginable, even though Luiz Antônio's knowledge of anatomy is slight. (on E. Degas,  Dubugras, 1979, p. 106)

What is the message?

At the end of the book 'Is that you, Renoir?' we can find the following passage by Mrs. Dubugras:


Through his mediumship, 5000 psi paintings were produced during the past 8 years and these were in the styles similar to those the discarnate artists used during their lifetime. However, a number of these artists are now adopting different styles, possibly feeling that they came to do through Luiz Antônio, that is, show that life continues after death and that the discarnates can communicate with us through adequate channels such as our young medium,  Rosemary Brown, Chico Xavier, Coral Polge and many others in different parts of the world. These changes in style also show that life after death is not static, that man's spirit evolves; by speaking of their previous lives, they prove that reincarnation is a fact. (E. Dubugras, 1979, p. 112)

Although the phenomenon is poorly understood (least to say, accepted) by mainstream science, it can not be denied nor invalidated by words. Rhetoric is incapable of 'erasing' such facts which will continue to exist, in spite of any academic disdain.

Brown R. (1971). "Unfinished Symphonies: Voices from the Beyond". William Morrow; 1st US edition.

Posted by Ademir Xavier at 9:10 AM